The new multi-purpose centre will be located away from the hustle and bustle in order to offer the children of the educational facilities an undisturbed place to play and romp. The building is placed as a cubic structure in the existing topography, resulting in two levels that can be accessed separately from each other, a forecourt and entrance level and a play and garden level that is protected from traffic and view.

The garden level forms the heart of the building. Due to the L-shaped layout of the building, all group rooms are oriented towards the green areas and thus have a strong connection to the outside space. By opening the building to the south-east, the entire area receives sufficient daylight and at the same time the garden is screened from the neighbouring buildings to the north and east. The open, bright rooms have an inviting effect and encourage the children to play and learn. The conception of the façade reinforces this concern. As a circumferential timber mullion and transom system, it wraps around the volume and forms a veranda in front of the building in the area of the terraces. In addition to the functional properties such as constructive sun protection and load-bearing structure, it takes on the function of roofing over the terraces, which invite people to play outside protected from the weather. The high degree of transparency allows an intensive experience of the four seasons. The veranda serves as a transition to the outdoor area and is continued in a surrounding pergola. It encloses the outdoor play area and offers covered recreation areas and play terraces. The outdoor area is structured by play mounds and planting so that a landscape is created on a childlike scale. The division into crèche and kindergarten is integrated into the design.
The sloping roof surfaces pick up on the heterogeneous surroundings and, in their design, exaggerate the formal language of the ubiquitous gable roof. At the same time, the playful gables create a childlike scale in the building volume and in conjunction with the garden area as the centrepiece, create the impression of a small village.

EU-wide, restricted competition with a preceding application procedure in the upper threshold range. 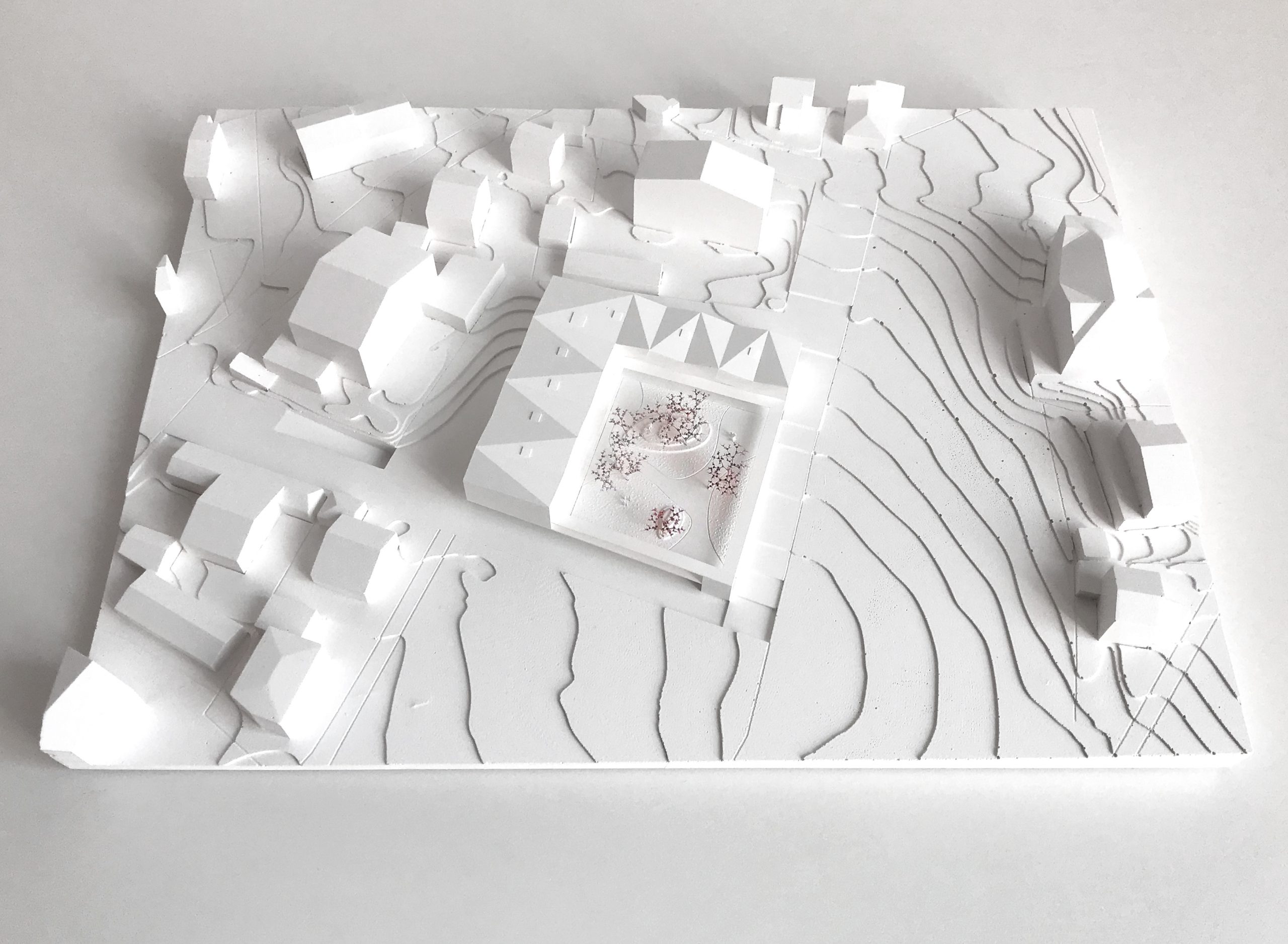 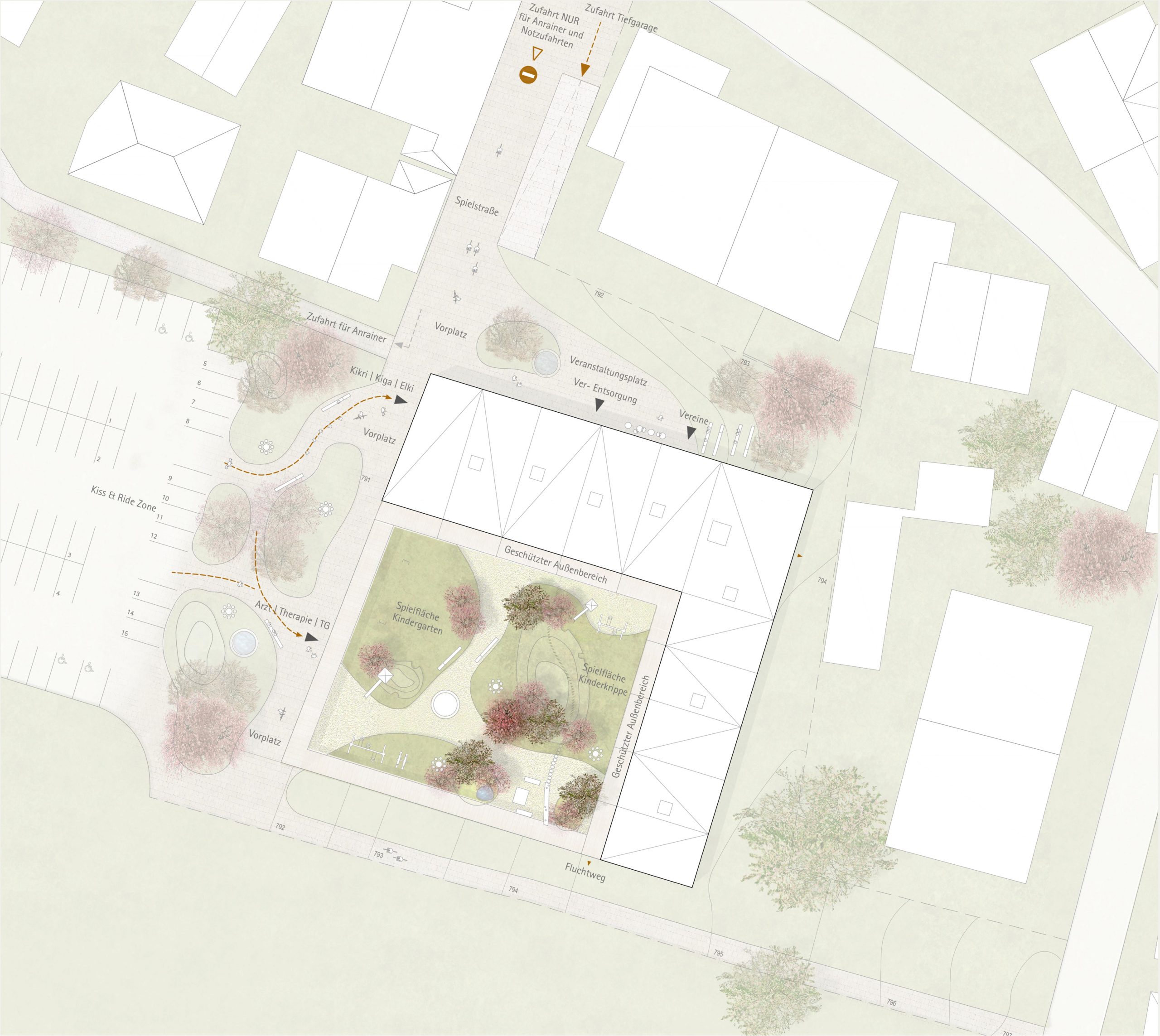 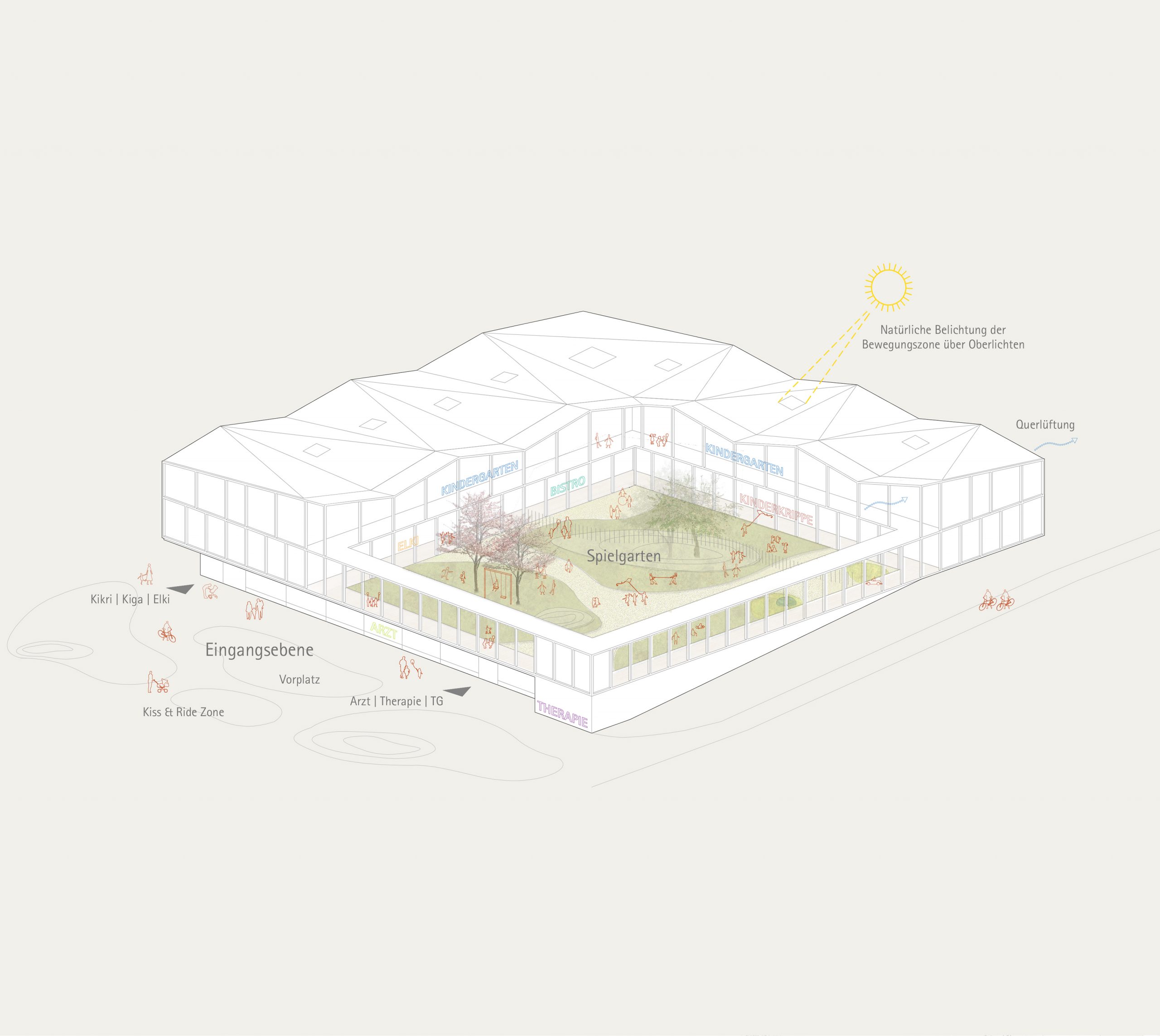 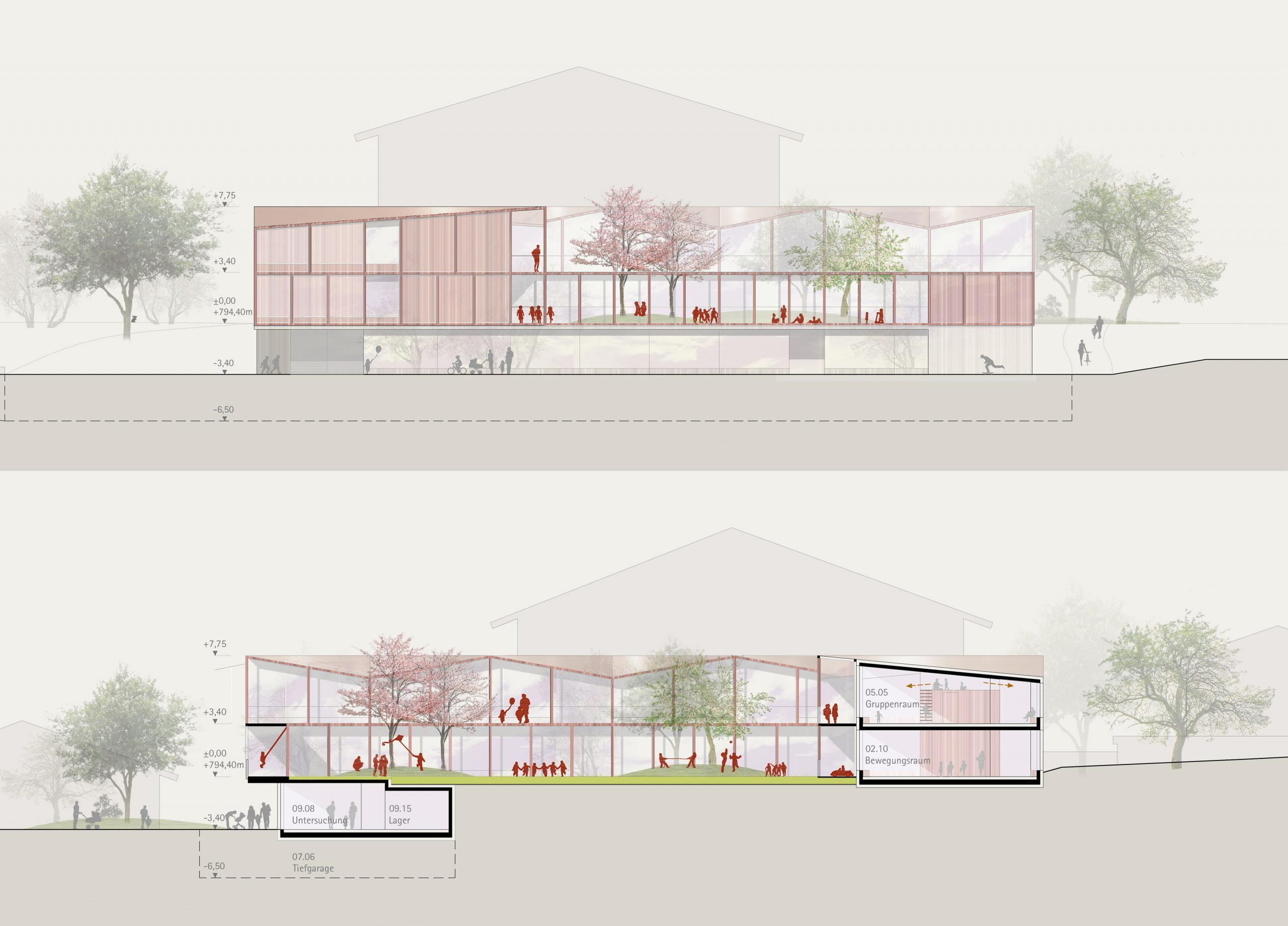 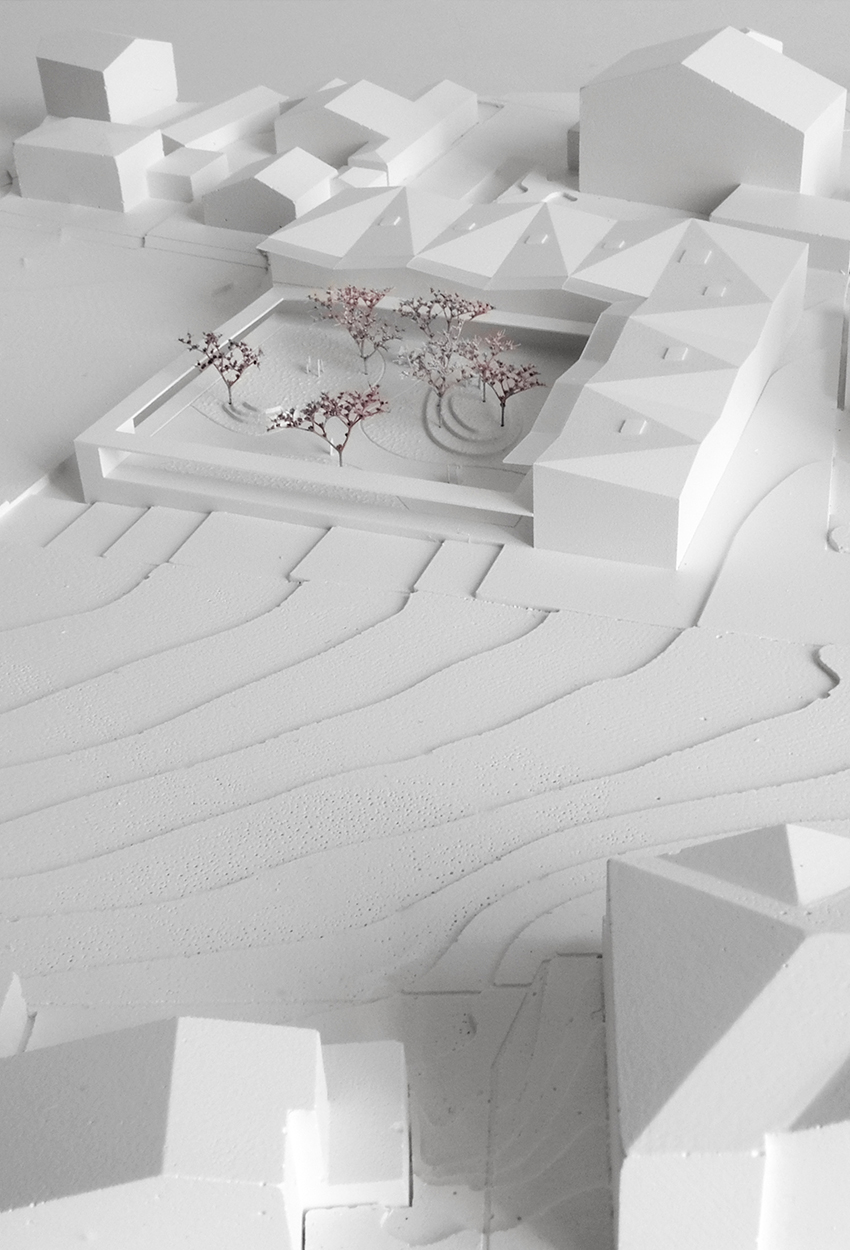